SEDMAX is a tool for the development of efficient strategies allowing to obtain accurate data on the status of production in order to make the right decisions.

The platform is based on a principle that SEDMAX adapts to the customer's tasks rather than the customer adapts its tasks to SEDMAX.

A system that adapts to the situation at the enterprise

SEDMAX software has been developed by a group of Russian engineers involved in creating automation systems in large enterprises.

For a very long time engineers were faced with the same problem: none of the software presented at the domestic and foreign markets was able to organize comprehensive monitoring of automation systems, including both IT-equipment and a variety of field level devices.

The first implementations showed that the developed software platform is really helpful in companies that have accumulated a number of different automation systems over the years. SEDMAX allows opting out on the use of many software products, the number of which grows every time a new system is installed.

It is not a secret that the theme of security of automated systems is one of the hottest in the modern world. It is not for nothing that in Russia the Astra Linux distributive is being developed and implemented. It certified by FSTEC and focused on data protection and used in a variety of government agencies.

SEDMAX provides the ability to create automated systems with increased security by deploying solutions based on the operating systems of the Linux family (including mentioned Astra Linux) and the possibility of spreading the technological and client components of the system to different servers and to different LANs.

The figure below shows one of the possible system architecture, where SEDMAX web servers are on the public LAN and interact with users workstations over a secure HTTPS protocol, and SEDMAX data collection and storage servers communicate with the responsible equipment connected to the process network. Data transfer between web servers and data collection and storage servers carried out through a firewall with configured security policies and traffic control.

SEDMAX allows you to make a choice:

— use Linux to improve information security
or
— Windows for ease of maintenance.

We build and combine local systems
You get full control over the entire equipment stock and the possibility to fully monitor your assets.

We provide a convenient tool for system development
You will be able to develop a system according to your needs, adding new sources of information, equipment or processes.

We connect an unlimited number of users
Even in the basic version of SEDMAX you will be able to connect to any number of users to simultaneously work through the web-interface.

We provide access to data from anywhere in the world where there is access to Internet
Secure data access from any smartphone, tablet, laptop, computer. You won’t have to leave the house at night for work to see the status and indicators of certain equipment and production process.

We develop custom functionality according to enterprise tasks and we do it fast
You won’t have to wait for months or write dozens of requests to finalize software for specific purposes: we will do the job in a timely and professional manner.

Fast deployment
The SEDMAX distribution kit will include system settings for your enterprise: description of the data sources, description of the information received, initial parameters, mnemonic diagrams, reporting forms, etc. You get a pre-configured system that matches your project. 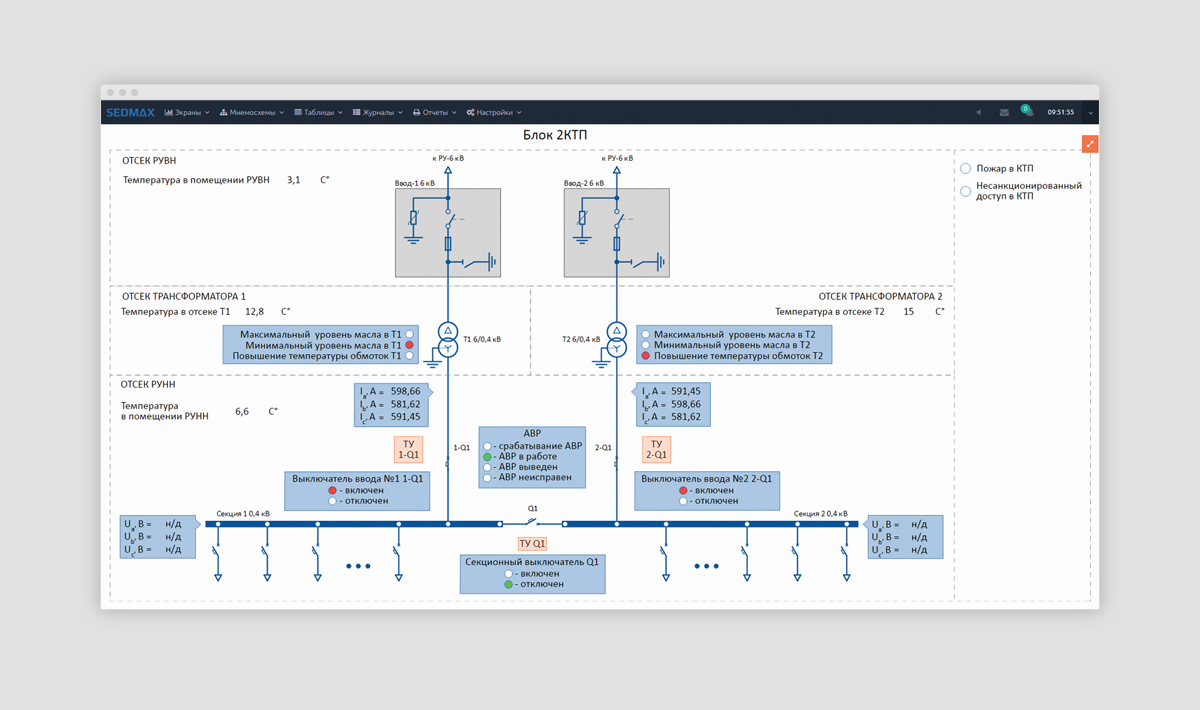 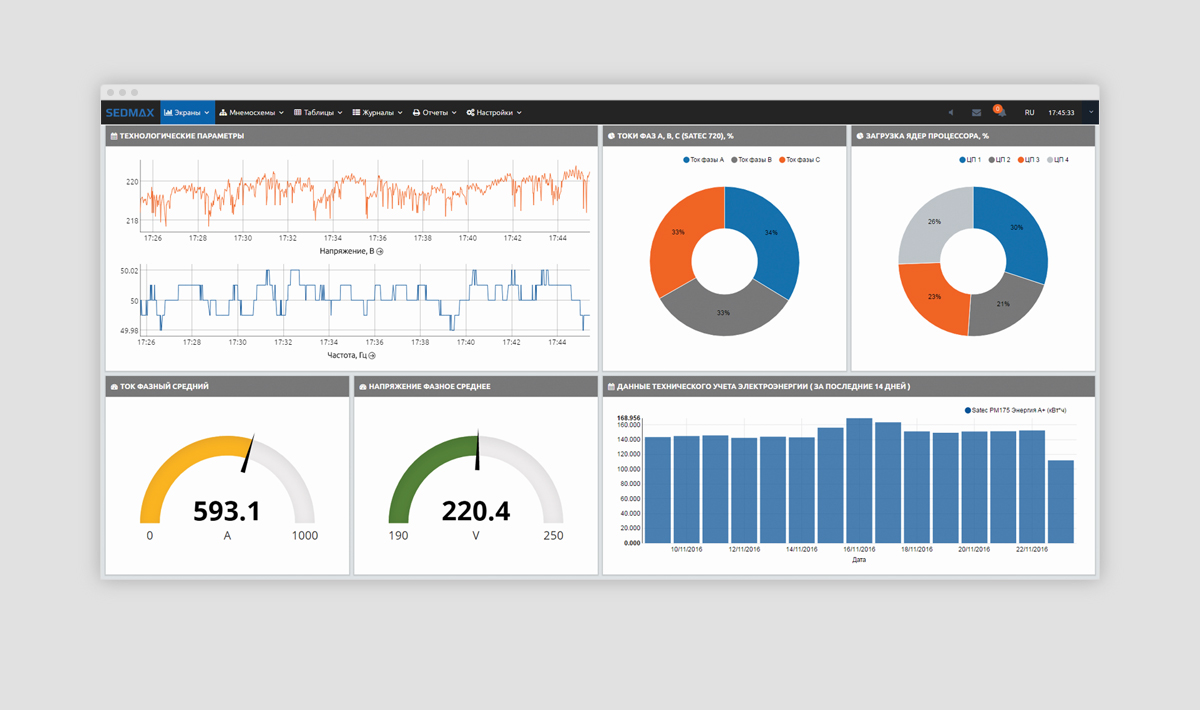 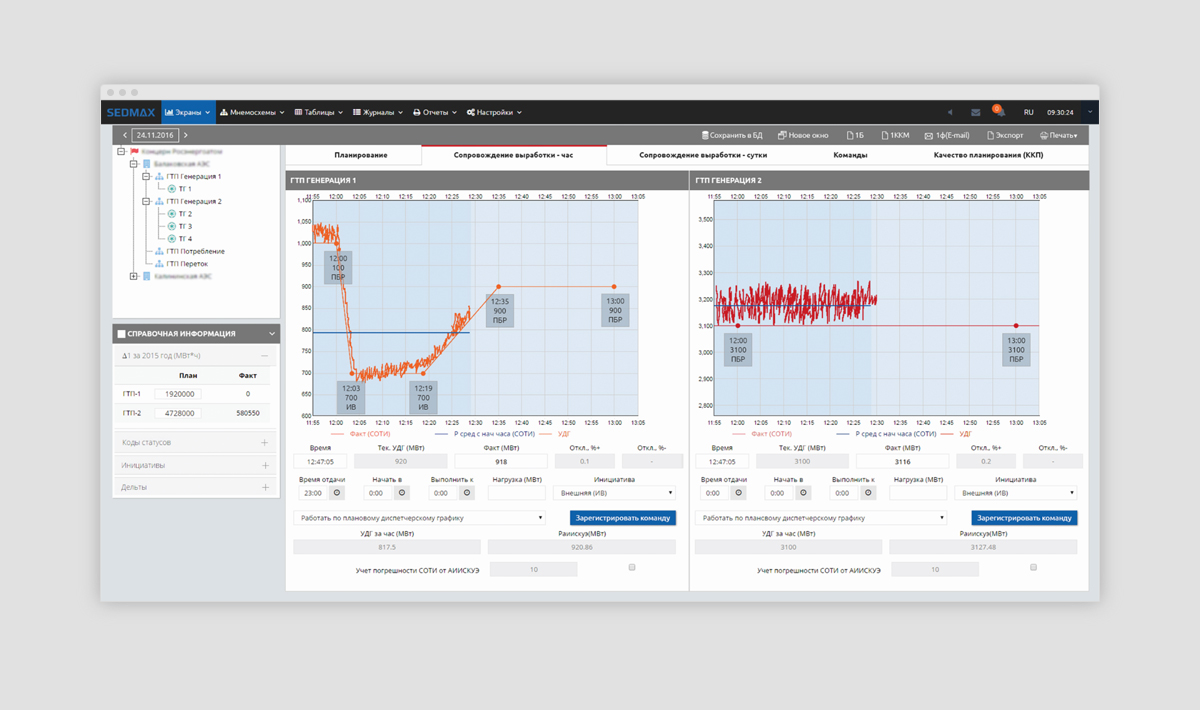 Features of the SEDMAX system

For alerting:
Examples of implementations

Stavropolenergo Monitoring, dispatching, metering and waveform collection and analysis at a 110 kV substation

SEDMAX Software is officially registered by the Federal Service for Intellectual Property (Rospatent) in the computer program registry.